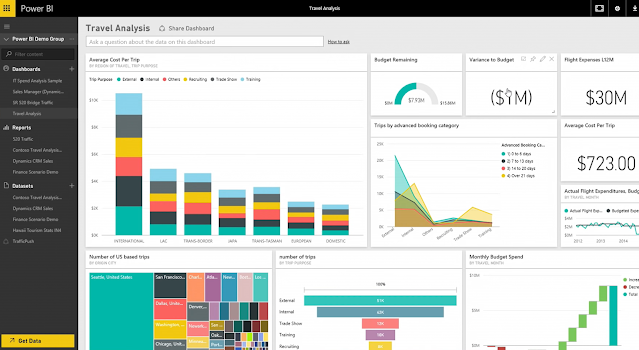 What is the difference between Power BI, PowerPivot, PowerQuery and PowerView?

ANS:
Power Query:
Power Query is a self-service ETL (Extract, Transform, Load) tool which runs as an Excel add-in. It allows users to pull data from various sources, manipulate said data into a form that suits their needs, and load it into Excel.

Power Pivot:
Power Pivot is an in-memory data modelling component that enables highly-compressed data storage and extremely fast aggregation and calculation. It is also available as part of Excel, and can be used to create a data model within an Excel workbook. Power Pivot can load data itself, or can have data loaded into it by Power Query. It is extremely similar to the SSAS (SQL Server Analysis Services) Tabular model, which is like a server-based version of Power Pivot.

Power View:
Power View is an interactive visualization tool which provides users with a drag-and-drop interface allowing them to build quick and easy visualizations of the data in their Excel workbooks (using the Power Pivot data model).

Power BI:
Power BI is a cloud-based tool-set which enables business users to service their own business intelligence needs. It is based on Microsoft's Office 365 and SharePoint Online products, and, through Excel 2013, encompasses Power Query, Power Pivot, and Power View.

Power BI (with Office 365 and SharePoint Online) provides a site where users can upload and share their created content with other users, as well as manage gateways into enterprise data source, enable data refresh, and advanced features like Q&A, which allows natural language querying of data models.

Microsoft have also released an early version of a standalone Power BI Designer application, which ties together Power Query, Power Pivot, and Power View in a standalone application, removing the Excel 2013 constraint.
It is also possible to achieve a lot of the functionality of Power BI using on-premise SQL Server 2012+, Excel 2010+ and SharePoint 2010+, if cloud-based is not an option for you.