Here we come with rapidly growing technology Cassandra's/NoSQL related interview questions answers. Which will help you in your interview, here are most impotent 50 interview questions with answers. If you like this set then please comment.
You can also download pdf, pdf link available at the end of post.

1). What is Apache Cassandra?
Ans: Apache Cassandra is an open source data storage system developed at Facebook for inbox search and designed for storing and managing large amounts of data across commodity servers. It can server as both

OR
Apache Cassandra is an open source, distributed and decentralized/distributed storage system (database), for managing very large amounts of structured data spread out across the world. It provides highly available service with no single point of failure.It was developed at Facebook for inbox search and it was open-sourced by Facebook in July 2008.

3). What is NoSQLDatabase?
Ans: NoSQL database (sometimes called as Not Only SQL) is a database that provides a mechanism to store and retrieve data other than the tabular relations used in relational databases. These databases are schema-free, support easy replication, have simple API, eventually consistent, and can handle huge amounts of data.


4). Cassandra is written in which language?
Ans: Java

5). How many types of NoSQL databases?
Ans:
6). What do you understand by composite type?
Ans: Composite Type is a cool feature of Hector and Cassandra.
It allow to define a key or a column name with a concatenation of data of different type.
With CassanraUnit, you can use CompositeType in 2 places :
7). What is the difference between Cassandra's schema and RDBMS schema?
Ans: http://www.interviewquestionspdf.com/2015/10/cassandra-interview-questions.html

9). List out some key features of Apache Cassandra?
Ans: It is scalable, fault-tolerant, and consistent.
It is a column-oriented database.
Its distribution design is based on Amazon’s Dynamo and its data model on Google’s Bigtable.
Created at Facebook, it differs sharply from relational database management systems.
Cassandra implements a Dynamo-style replication model with no single point of failure, but adds a more powerful “column family” data model.
Cassandra is being used by some of the biggest companies such as Facebook, Twitter, Cisco, Rackspace, ebay, Twitter, Netflix, and more.

11). What do you understand by Node in Cassandra?
Ans: Node is the place where data is stored.

13). What do you understand by Cluster in Cassandra?
Ans: Cluster is a component that contains one or more data centers.

15). What do you understand by Mem-table in Cassandra?
Ans: Mem-table is a memory-resident data structure. After commit log, the data will be written to the mem-table. Sometimes, for a single-column family, there will be multiple mem-tables.

16). What do you understand by SSTabl in Cassandra?
Ans: SSTable is a disk file to which the data is flushed from the mem-table when its contents reach a threshold value.

17). What do you understand by Bloom filter in Cassandra?
Ans: Bloom filter are nothing but quick, nondeterministic, algorithms for testing whether an element is a member of a set. It is a special kind of cache. Bloom filters are accessed after every query.

18). What do you understand by CQL?
Ans: User can access Cassandra through its nodes using Cassandra Query Language (CQL). CQL treats the database (Keyspace) as a container of tables. Programmers use cqlsh: a prompt to work with CQL or separate application language drivers.

20). What is the use of "void close()" method?
Ans: This method is used to close the current session instance.

21). What is the use of "ResultSet execute(Statement statement)" method?
Ans: This method is used to execute a query. It requires a statement object.

22). Which command is used to start the cqlsh prompt?
Ans: Cqlsh

23). What is the use of "cqlsh --version" command?
Ans: This command will provides the version of the cqlsh you are using.


25). What is Cassandra database used for?
Ans: Apache Cassandra is a second-generation distributed database originally open-sourced by Facebook. Its write-optimized shared-nothing architecture results in excellent performance and scalability. The Cassandra storage cluster and S3 archival layer are designed to expand horizontally to any arbitrary size with linear cost.Cassandra’s memory footprint is more dependent on the number of column families than on the size of the data set. Cassandra scales pretty well horizontally for storage and IO, but not for memory footprint, which is tied to your schema and your cache settings regardless of the size of your cluster. some of the important link about casandara is available-here.

27). What is a keyspace in Cassandra?
Ans: In Cassandra, a keyspace is a namespace that determines data replication on nodes. A cluster consist of one keyspace per node.

28). What is cqlsh?
Ans: cqlsh is a Python-based command-line client for cassandra.

30). What do you understand by Consistency in Cassandra?
Ans: Consistency means to synchronize and how up-to-date a row of Cassandra data is on all of its replicas.

31). Explain Zero Consistency?
Ans: In this write operations will be handled in the background, asynchronously. It is the fastest way to write data, and the one that is used to offer the least confidence that operations will succeed.

32). What do you understand by Thrift?
Ans: Thrift is the name of the RPC client used to communicate with the Cassandra server.

33). What do you understand by Kundera?
Ans: Kundera is an object-relational mapping (ORM) implementation for Cassandra written using Java annotations.

35). What is the difference between Cassandra, Hadoop Big Data, MongoDB, CouchDB?
Ans: http://www.interviewquestionspdf.com/2015/10/what-is-difference-between-cassandra.html

36). When to use Cassandra?
Ans: Being a part of NoSQL family Cassandra offers solution for problem where your requirement is to have very heavy write system and you want to have quite responsive reporting system on top of that stored data. Consider use case of Web analytic where log data is stored for each request and you want to built analytical platform around it to count hits by hour, by browser, by IP, etc in real time manner.

37). When should you not use Cassandra? OR When to use RDBMS instead of Cassandra?
Ans: Cassandra is based on NoSQL database and does not provide ACID and relational data property. If you have strong requirement of ACID property (for example Financial data), Cassandra would not be a fit in that case. Obviously, you can make work out of it, however you will end up writing lots of application code to handle ACID property and will loose on time to market badly. Also managing that kind of system with Cassandra would be complex and tedious for you.

38). What are secondary indexes?
Ans: Secondary indexes are indexes built over column values. In other words, let’s say you have a user table, which contains a user’s email. The primary index would be the user ID, so if you wanted to access a particular user’s email, you could look them up by their ID. However, to solve the inverse query given an email, fetch the user ID requires a secondary index.

39). When to use secondary indexes?
Ans: You want to query on a column that isn't the primary key and isn't part of a composite key. The column you want to be querying on has few unique values (what I mean by this is, say you have a column Town, that is a good choice for secondary indexing because lots of people will be form the same town, date of birth however will not be such a good choice).

42). What happens to existing data in my cluster when I add new nodes?
Ans: When a new nodes joins a cluster, it will automatically contact the other nodes in the cluster and copy the right data to itself.

43). What are "Seed Nodes" in Cassandra?
Ans: A seed node in Cassandra is a node that is contacted by other nodes when they first start up and join the cluster. A cluster can have multiple seed nodes. Seed node helps the process of bootstrapping for a new node joining a cluster. Its recommended to use the 2 seed node per data center.

44). What are "Coordinator Nodes" in Cassandra?
Ans: Coordinator Nodes: Its a node which receive the request from client and send the request to the actual node[hash(key) => token] depending upon the token. So all the nodes acts as coordinator node,because every node can receive a request and proxy that request. 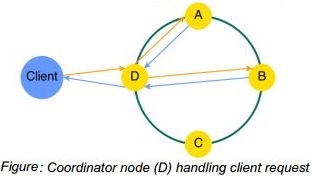 46). What ports does Cassandra use?
Ans: By default, Cassandra uses 7000 for cluster communication, 9160 for clients (Thrift), and 8080 for JMX. These are all editable in the configuration file or bin/cassandra.in.sh (for JVM options). All ports are TCP.

47). What do you understand by High availability?
Ans: A high availability system is the one that is ready to serve any request at any time. High avaliability is usually achieved by adding redundancies. So, if one part fails, the other part of the system can serve the request. To a client, it seems as if everything worked fine.

48). How Cassandra provide High availability feature?
Ans: Cassandra is a robust software. Nodes joining and leaving are automatically taken care of. With proper settings, Cassandra can be made failure resistant. That means that if some of the servers fail, the data loss will be zero. So, you can just deploy Cassandra over cheap commodity hardware or a cloud environment, where hardware or infrastructure failures may occur.

49). Who uses Cassandra?
Ans: Cassandra is in wide use around the world, and usage is growing all the time. Companies like Netflix, eBay, Twitter, Reddit, and Ooyala all use Cassandra to power pieces of their architecture, and it is critical to the day-to-da operations of those organizations. to date, the largest publicly known Cassandra cluster by machine count has over 300TB of data spanning 400 machines.
Because of Cassandra's ability to handle high-volume data, it works well for a myriad of applications. This means that it's well suited to handling projects from the high-speed world of advertising technology in real time to the high-volume world of big-data analytics and everything in between. It is important to know your use case before moving forward to ensure things like proper deployment and good schema design.

50). When to use secondary indexes?
Ans: You want to query on a column that isn't the primary key and isn't part of a composite key. The column you want to be querying on has few unique values (what I mean by this is, say you have a column Town, that is a good choice for secondary indexing because lots of people will be form the same town, date of birth however will not be such a good choice).

52). What do you understand by Snitches?
Ans: A snitch determines which data centers and racks nodes belong to. They inform Cassandra about the network topology so that requests are routed efficiently and allows Cassandra to distribute replicas by grouping machines into data centers and racks. Specifically, the replication strategy places the replicas based on the information provided by the new snitch. All nodes must return to the same rack and data center. Cassandra does its best not to have more than one replica on the same rack.


53). What is Hector?
Ans: Hector is an open source project written in Java using the MIT license. It was one of the early Cassandra clients and is used in production at Outbrain. It wraps Thrift and offers JMX, connection pooling, and failover.

54). What do you understand by NoSQL CAP theorem?
Ans:
In order to get both availability and partition tolerance, you have to give up consistency. Consider if you have two nodes, X and Y, in a master-master setup. Now, there is a break between network comms in X and Y, so they can't synch updates. At this point you can either:
A) Allow the nodes to get out of sync (giving up consistency), or
B) Consider the cluster to be "down" (giving up availability)

All the combinations available are: 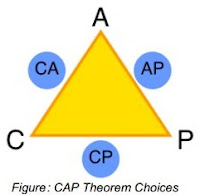 55). What is Keyspace in Cassandra?
Ans: Before doing any work with the tables in Cassandra, we have to create a container for them,
otherwise known as a keyspace. One of the main uses for keyspaces is defining a replication
mechanism for a group of tables.
Example:
CREATE KEYSPACE used_cars WITH replication = { 'class': 'SimpleStrategy',
'replication_factor' : 1};