Many of us believe that machine learning is a very futuristic thing. However, it is increasingly present in our lives, whether when a Googl...

5
MACHINE LEARNING INTERVIEW QUESTIONS, Machine Learning Interview Questions PDF
A+ A-
Email Print
https://www.interviewquestionspdf.com/2018/03/machine-learning-interview-questions.html
Many of us believe that machine learning is a very futuristic thing. However, it is increasingly present in our lives, whether when a Google computer plays an incredible game of Go, or when Gmail generates automatic responses. While all this sounds exciting, many of us continue to wonder what machine learning exactly consists of, why it is so important or why identifying a dog in a photo is not as simple as it seems. In order to analyze all this, we have met with Maya Gupta, a researcher at Google in this field.

Let's start with the simplest: what exactly is machine learning?
It is the process of machine learning that takes a set of examples, discovers the patterns behind them and uses them to make predictions about new examples.

Think, for example, about movie recommendations. Let's suppose that a billion people tell us their ten favorite movies. That would be the set of examples that the computer can use to discover which movies are common among that group of people. Next, the computer elaborates patterns to explain those examples, such as "People who like horror movies do not like romantic ones, but they do like movies in which the same actors appear". Therefore, if you tell the computer that you like The Shining of Jack Nicholson, you can deduce if you also like romantic comedy.

We understand it or almost. However, how does this translate into practice?
In practice, the patterns that the machine learns can be very complex and difficult to explain with words. Let's use Google Photos as an example, which allows you to search your photos for pictures of dogs. How does Google do it? Well, first, we use a set of examples of photos labeled "dog" (thanks to the Internet). We also use a set of photos labeled "cat", as well as photos with millions of different labels, but I will not list them all here.

Next, the computer looks for patterns of pixels and patterns of colors that help you to find out if it is a cat, a dog or anything else. First, he makes a random estimate of the patterns that might be adequate to identify dogs. Then examine an example of an image of a dog and see if its patterns fit correctly. If you check that a cat is mistakenly called a cat, make some adjustments to the patterns used. Then examine the image of a cat and refine its patterns to try to get the most accurate. This process is repeated about a billion times: it examines an example and, if the pattern is not correct, it changes it to improve the result of it.

In the end, the patterns constitute a model of machine learning, as if it were a deep neural network that can (almost) correctly identify dogs, cats, firemen and many other things. 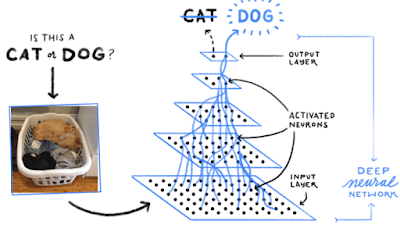 That sounds very futuristic. What other Google products currently use machine learning?
Google is using machine learning in many new projects, such as Google Translate, which can take a picture of a signage sign or restaurant menu in a language, discover the words and language that appear in the photo, and translate them by magic and in real time to your language.

You can also send almost any voice message to Google Translate and speech recognition can be processed by machine learning. Speech recognition technology is used in other Google products, for example, to make voice queries in the Google application or to search for videos more easily on YouTube.

Machine learning is the same as artificial intelligence?
Although in reality the meaning of these concepts can vary according to people, artificial intelligence (AI) is basically a broad term that refers to software that tries to solve problems that are simple for humans, such as describing what happens in an image. One of the most incredible things that humans do with ease is to learn from the examples. This is what machine learning programs are trying to do: teaching computers how to learn from examples.

The best thing is that when we discovered how to develop these software, we can expand this knowledge to handle data very quickly and solve really complex problems such as, for example, play as an expert to the Go, tell the way to all users so Simultaneously, optimize energy consumption nationwide and, my favorite, find the best results in the Google search engine.

So, why is Google now giving so much importance to machine learning?
Machine learning is not something new, since it goes back to the eighteenth century statistics, but it is true that lately it is booming and this is due to three reasons that I will explain below.

The first one is that we need an immense amount of examples to teach computers how to make good predictions, even about things that you and I consider easy (like finding a dog in a photo). With all the activity on the Internet, we now have a broader source of examples that computers can use. For example, there are now millions of pictures of dogs with the "dog" tag on websites around the world and in all languages.

But it is not enough to have many examples. You can not simply show a bunch of dog photos to a webcam and expect him to learn everything; the computer needs a learning program. In fact, lately the sector (and also Google) has made important advances in terms of the complexity and power that these learning programs can have.

However, our programs are still not perfect and computers are still not very intelligent, so we have to see many examples numerous times to change the digital controls and get accurate results. Although this requires enormous processing capacity, new advances in software and hardware have also made this possible.

Is there something that computers can not do today but what can they do in the future thanks to machine learning?
Until now, the voice recognition tried to detect only ten different digits when you said your credit card number by phone. Voice recognition has achieved incredible advances in the last five years with the use of machine learning, and now we can use it to search Google and every time more quickly.

I think machine learning can also help us improve our appearance. I do not know about you, but I hate to try on clothes. If I find a jeans brand that suits me, I buy five. Well, machine learning can convert examples of brands that we feel good into recommendations of other clothes that could equally well fit. This is out of Google's reach, but I hope someone is investigating it.

What will machine learning be like in ten years?
The sector is currently working to achieve faster learning from fewer examples. One way to address this (something that Google is emphasizing) is to provide our machines with more common sense, what in the sector is called "regularization".

What is common sense for a machine?
In general, it means that if an example changes only a little, the machine should not omit it. That is, a picture of a dog wearing a cowboy hat is still a dog.

We impose this kind of common sense when we get that machine learning is able to obviate small and insignificant changes, like a cowboy hat. Although this seems easy to say, if we make a mistake, it is possible that a machine does not detect important changes well. It is about reaching a balance and we are still working to achieve it.

For you, what is the most exciting thing about machine learning? What motivates you to work with him?
I grew up in Seattle, where we learned a lot about the first explorers in the Western United States, such as Lewis and Clark. Machine learning has that same spirit of exploration, since we discover things for the first time and try to trace a path towards a great future.

If you could put a slogan to Google's machine learning, what would it be?
If you do not get it first, try a billion times more.