Reply
NEWS
A+ A-
Email Print
https://www.interviewquestionspdf.com/2018/03/microsoft-blazor-010-released.html
Microsoft has recently released the first public preview of a new .NET web framework, Blazor. This new .NET web framework uses C#/Razor and HTML using the browser with WebAssembly. Blazor enables the full stack web development with the productivity of .NET but, as this is an alpha version it should not be used in production. 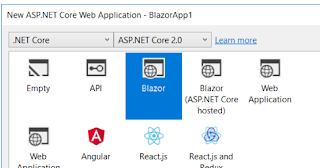 Microsoft states in the official blog –
“In this release, we've laid the groundwork for the Blazor component model and added other foundational features, like routing, dependency injection, and JavaScript interop. We've also been working on the tooling experience so that you get great Intelli-Sense and completions in the Razor editor. Other features that have been demonstrated previously in prototype form, like live reload, debugging, and prerendering, have not been implemented yet, but are planned for future preview updates. Even so, there is plenty in this release for folks to start kicking the tires and giving feedback on the current direction.”