Query Store - A New SQL Query Tuning Feature Have you ever come in to work only to have the boss come tell you that your main site is down...

Reply
MS SQL SERVER, QUERY STORE, SQL SERVER 2016, SQL SERVER 2016 NEW FEATURES
A+ A-
Email Print
https://www.interviewquestionspdf.com/2015/08/sql-server-2016-new-features-query.html
Query Store - A New SQL Query Tuning Feature
Have you ever come in to work only to have the boss come tell you that your main site is down and the database is "broken"?  Fixing query performance problems can be rough, especially in high-pressure situations.  Microsoft has developed a feature to help customers gain significantly easier insight into production systems and to be able to quickly fix cases where a new plan choice from the query optimizer has undesired performance consequences.  This talk introduces the Query Store, explains the architecture, and shows how it can be used to solve real-world performance problems.

It will now be possible to ask questions like "show me what query plans have changed since yesterday" and to quickly ask the optimizer to "go back" to the query plan that was working fine for you previously.

In this episode of Data Exposed, Scott Welcomes Borko Novakovic, Program Manager in the SQL Server team. Borko joins Scott via Skype from his office in Belgrade, Serbia to introduce us to Query Store in SQL Server 2016, an awesome new technology which, among other things Borko explains, allows you to store the history of query plans in the system and capture the performance of each query over time. The Query Store also lets you look at and identify queries that have performed slower of time and make necessary adjustments. Borko shows us how easy it is to work with the Query Store and work with query plans. 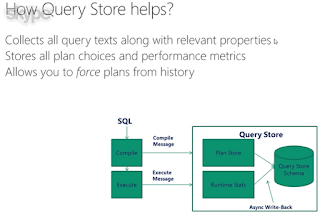 If you troubleshoot query performance as part of your DBA responsibilities, then this show is a "much watch" for you!

What Does the Query Store Do?
Conor mentioned the Query Store performs and can help with the following:
1.Store the history of query plans in the system;
2.Capture the performance of each query plan over time;
3.Identify queries that have "gotten slower recently";
4.Allow you to force plans quickly; and,
5.Make sure this works across server restarts, upgrades, and query recompiles. 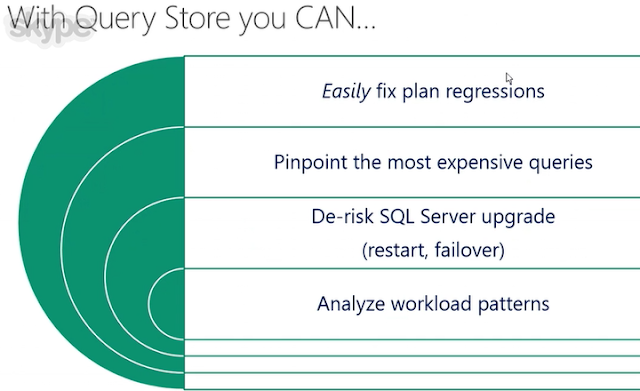