TOP 10 Things you should know about Google CEO Sundar Pichai

Google has announced a massive restructuring of its business that moves it under the control of a brand-new company, Alphabet. India-born ...

1
ALPHABET, GOOGLE, SUNDAR PICHAI BIOGRAPHY PDF.GOOGLE
A+ A-
Email Print
https://www.interviewquestionspdf.com/2015/08/top-10-things-you-should-know-about.html
Google has announced a massive restructuring of its business that moves it under the control of a brand-new company, Alphabet.
India-born Sundar Pichai has been promoted to CEO of Google. 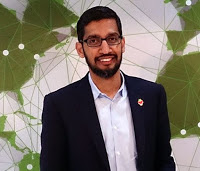 2). His father was an electrical engineer with a British firm called GEC. Although he worked in an MNC, Pichai senior had to work extremely hard to bring up his two boys. In the late seventies, he had to wait three years to get himself a new scooter but he did not compromise on providing the best education to the two kids.

3). He earned his Bachelor of Engineering degree from Indian Institute of Technology, Kharagpur (IIT Kharagpur) in Metallurgical Engineering. He also holds an M.S. from Stanford University and an MBA from the Wharton School of the University of Pennsylvania, where he was named a Siebel Scholar and a Palmer Scholar.

4). Android's cumulative growth has been staggering under him. If one tracks the 30-day-active-users, of Android, the number has gone from 230 million a few years ago to 1 billion active users now.

5). As of 2014, Sundar Pichai was given a $50 million annual salary package by Google. Some say this was a desperate move by Google as it didn't want to lose Sundar Pichai to Microsoft or Twitter.

7). Pichai has more than 15 years of experience developing high-tech consumer and enterprise products.

8). Sundar joined Google just before its 2004 initial public offering and several colleagues who worked with him in the years following said he never seemed anointed for the top job.

9). He led successful efforts for difficult projects that were core to Google's continued financial success, namely Toolbar and Chrome. Toolbar wasn't an obviously likable product but it helped defend the presence of Google search on users' computers during a critical period following the revelation of Google's incredible profitability. Chrome extended that mission to improve the user experience of the entire web: keep users on the web and you'll keep them searching on Google.

10). Apart from being the obvious tech enthusiast Pichai is known to be an avid soccer and basketball fan.