Here we come up with most growing technology for Mobile world known as Appcelerator. Appcelerator is enabling developers to build mobile a...

3
APPCELERATOR TITANIUM, APPCELERATOR TITANIUM INTERVIEW QUESTIONS, MOBILE APP DEVELOPMENT
A+ A-
Email Print
https://www.interviewquestionspdf.com/2016/06/top-30-appcelerator-titanium-interview.html
Here we come up with most growing technology for Mobile world known as Appcelerator.
Appcelerator is enabling developers to build mobile apps with one common language and distribute apps to many different platforms. The idea itself is already a good one. Especially if they're using a scripting language that is so widely known and used as javascript.

There are challenges of-course, but so far they're doing quite well. There is new major version of Titanium SDK coming out that's supposed to be even faster. The community is rather strong. Their approach to open source ideology is spot on. Many large tech companies have apps in stores built on top of Titanium.
I believe Appcelerator is going to be best mobile app development platform soon, I had great future.


Here are the Appcelerator Titanium Interview Questions and Answers

Developed using a JavaScript-based platform with an integrated Eclipse-based IDE:

Titanium framework uses code written in JavaScript, combines this code with the Titanium API (which is in written in the targeted device’s native language) further evaluates code at runtime using JavaScript interpreter which runs on the device’s operating systems.
Faster than other Mobile application framework:TITANIUM helps in developing mobile applications 70 times faster than other mobile
application framework available in the market. This framework helps in developing mobileapps in much less time as compared to others.

Flexibility:TITANIUM is an important tool to develop different web based applications including e-books, mobile applications and other business applications

Great Look and feel:The look and feel of a Titanium application, using common UI widgets of the platform is an added advantage.
Titanium offers several user-friendly features across multiple platforms which should be used by the developers. Titanium is an attempt to achieve code reuse using a unified JavaScript API, with platform-specific features and native performance.

Easy to learn & deploy:Developers can easily learn about this framework as it comprises HTML5, CSS3, jQuery, Ajax and JavaScript. So, it will be extremely easy for expert to learn every nitty-gritty aspect of Titanium and make use it to empower in the design work.

What are the Disadvantage\Limitations of using the Titanium mobile application development?
Extending to other platforms:The Titanium platform is only available for the iOS, Android platforms and the web. To implement the Titanium API on new platforms like the upcoming Windows 8 is an immense undertaking.

Non-native user experience:The performance and feel of UI widget sets that Titanium provides need more work. They do not feel similar to the native controls offered by their SDKs.

Huge learning curve:A comprehensive knowledge of Titanium's architecture and the environment is required to effectively integrate an innovative native control or API. High level guides for module developers were improved to a great extent but still need to be worked upon. 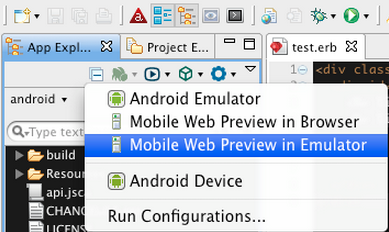 Explain the architecture of Appcelerator Titanium?
The core features of Appcelerator Titanium include:
A cross-platform API for accessing native UI components such as navigation bars, menus, and dialog boxes and native device functionality including the file system, network, geolocation, accelerometer, and maps.
Transparent access to native functionality not already covered by the API.
All application source code gets deployed to the mobile device where it is interpreted using a JavaScript engine; Mozilla's Rhino is used on Android and BlackBerry, and Apple's Javascriptcore is used on iOS. In 2011 it was announced that a port to Google's V8 JavaScript engine is in development which, when complete, will significantly improve performance. Program loading takes longer than it does for programs developed with the native SDKs, as the interpreter and all required libraries must be loaded before interpreting the source code on the device can begin.

How you will optimize a Titanium app?
You mostly have to care about memory leaks. You have a VERY important webcast on the subject. In short; be very careful to :

What do you understand by ArrowDB?
Appcelerator ArrowDB provides a set of REST APIs for creating, managing, and accessing different types of data in your cloud datasoucrce, such as Users, Places, and Photos over HTTP or HTTPS. You can integrate ArrowDB into your application using the Titanium, iOS, Android or Node.js SDKs, or by calling the REST APIs directly.

How you will create an Hellp, World Titanium app. Write the code?
In the Project Explorer view, open index.xml located in the app/views folder. As below

How you will apply MVC Architecture in Titanium mobile apps?
Click here for answer