Explain what is DevOps? DevOps is a newly emerging term in IT field, which is nothing but a practice that emphasizes the collaboration and...

Reply
DevOps Interview Questions
A+ A-
Email Print
https://www.interviewquestionspdf.com/2016/01/top-20-devops-interview-questions.html
Explain what is DevOps?
DevOps is a newly emerging term in IT field, which is nothing but a practice that emphasizes the collaboration and communication of both software developers and other information-technology (IT) professionals. It aims at establishing a culture and environment where building, testing, and releasing software, can happen rapidly, frequently, and more reliably.

What do you understand by this diagram? 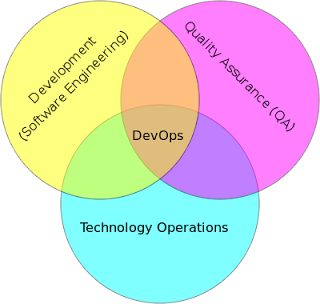 This diagram is showing DevOps as the intersection of development (software engineering), technology operations and quality assurance

Explain Bimodal IT model?
Bimodal IT is the practice of managing two separate, coherent modes of IT delivery, one focused on stability and the other on agility. Mode 1 is traditional and sequential, emphasizing safety and accuracy. Mode 2 is exploratory and nonlinear, emphasizing agility and speed.

Explain Mode 1?
Mode 1 is a traditional ,plan driven approach that emphasizes safety and accuracy in the pursuit of reliability. Tend to be more rigorous with change management.

Explain Mode 2?
Mode 2 is iterative,being largely outcome focused and emphasizing agility and "just enough" with respect to areas such as planning and process.

What makes a great dev ops?
Great DevOps People Are:
Focused on the Goal not who got you there
Supportive of others
Not only stands on the shoulders of Giants but puts others on their shoulders
Is resistant to blaming anyone or any team
Shows Empathy and support for others